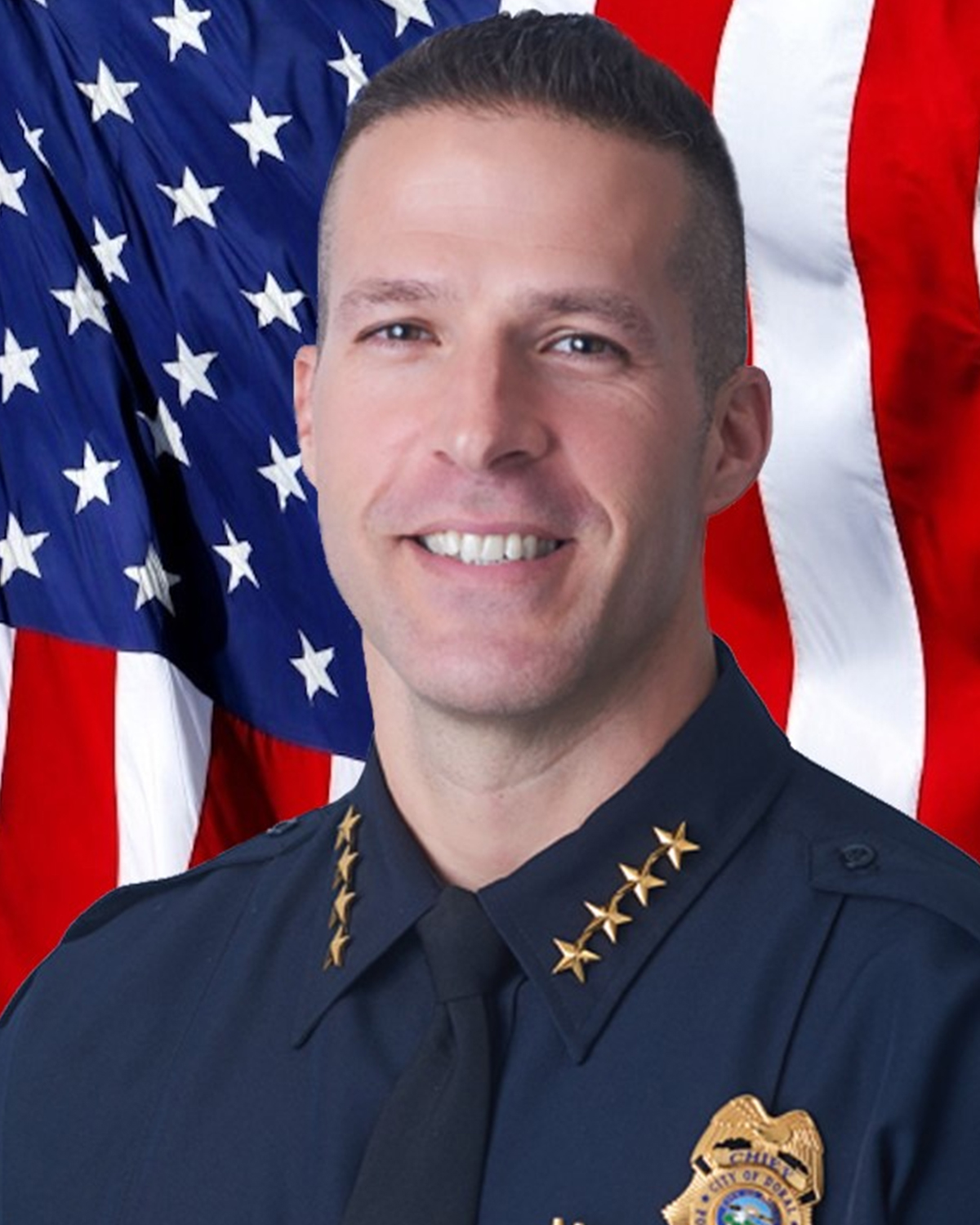 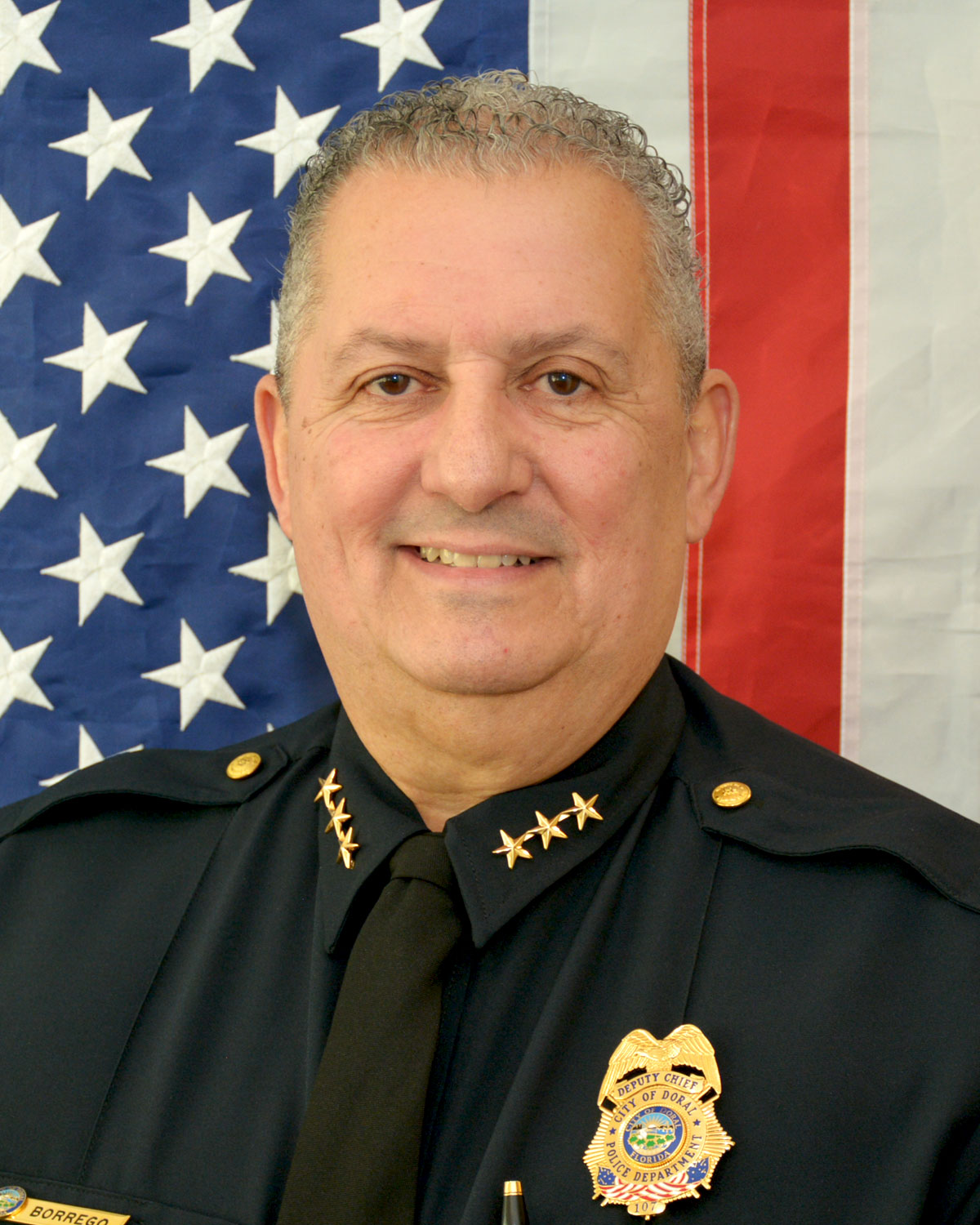 Deputy Chief Borrego’s last assignment with MDPD was as the lieutenant in charge of the Professional Compliance Bureau, Criminal Conspiracy Section. During his career with MDPD, Deputy Chief Borrego worked extensively in the Homicide Bureau as investigator and supervisor working in many publicized and notorious murders. Deputy Chief Borrego was also assigned to the Centac (Central Tactical Unit 26) Special Investigations Section, a federally funded multi-agency task force with the Drug Enforcement Agency (DEA) created in 1980 to investigate drug-related murders.

Deputy Chief Borrego has a Bachelor’s Degree in Organizational Leadership from St. Thomas University and is a graduate of the University of Louisville, Southern Police Institute, and Command Officers Development Course. Deputy Chief Borrego has instructed and lectured at local colleges and for law enforcement professionals throughout the United States on topics such as, Internal Affairs, Proactive Investigations, Surveillance Techniques and Police Involved Shootings. Among many accolades, Deputy Chief Borrego received the 2003 United States Attorney’s Office, Outstanding Law Enforcement Officer of the Year Award. He is also a member of the International Association of Chiefs of Police (IACP), Police Executive Research Forum (PERF), and Miami Dade County Association of Chiefs of Police (MDCACP), Hispanic Police Officers Association (HPOA) and the Florida Internal Affairs Investigators Association. Major Seiglie has served the public for over 40 years. He began his law enforcement career with The City of Miami Police Department and retired honorably in 2011, after rising to the rank of Assistant Chief of Police. In October of 2012, Jose Seiglie joined the Doral Police Department, in charge of Platoon II and later was promoted to the rank of Major in charge of Police Operations Division and the General Investigations Section.

In his current assignment as the Major of the Emergency Management Service, Major Seiglie is responsible for Department’s Divisional Office of Emergency Management and Training Section. Major Seiglie holds a Bachelor’s degree from Union Institute & University and a Master’s degree in Homeland Security from Keiser University. He is a graduate of the 255th Session of the FBI’s National Academy. Major Seiglie was also voted Officer of the Year in 1982 and Miami Dade County Crisis Intervention Officer of the Year 2006. He was born and raised in Miami. He is married and is the father of two. 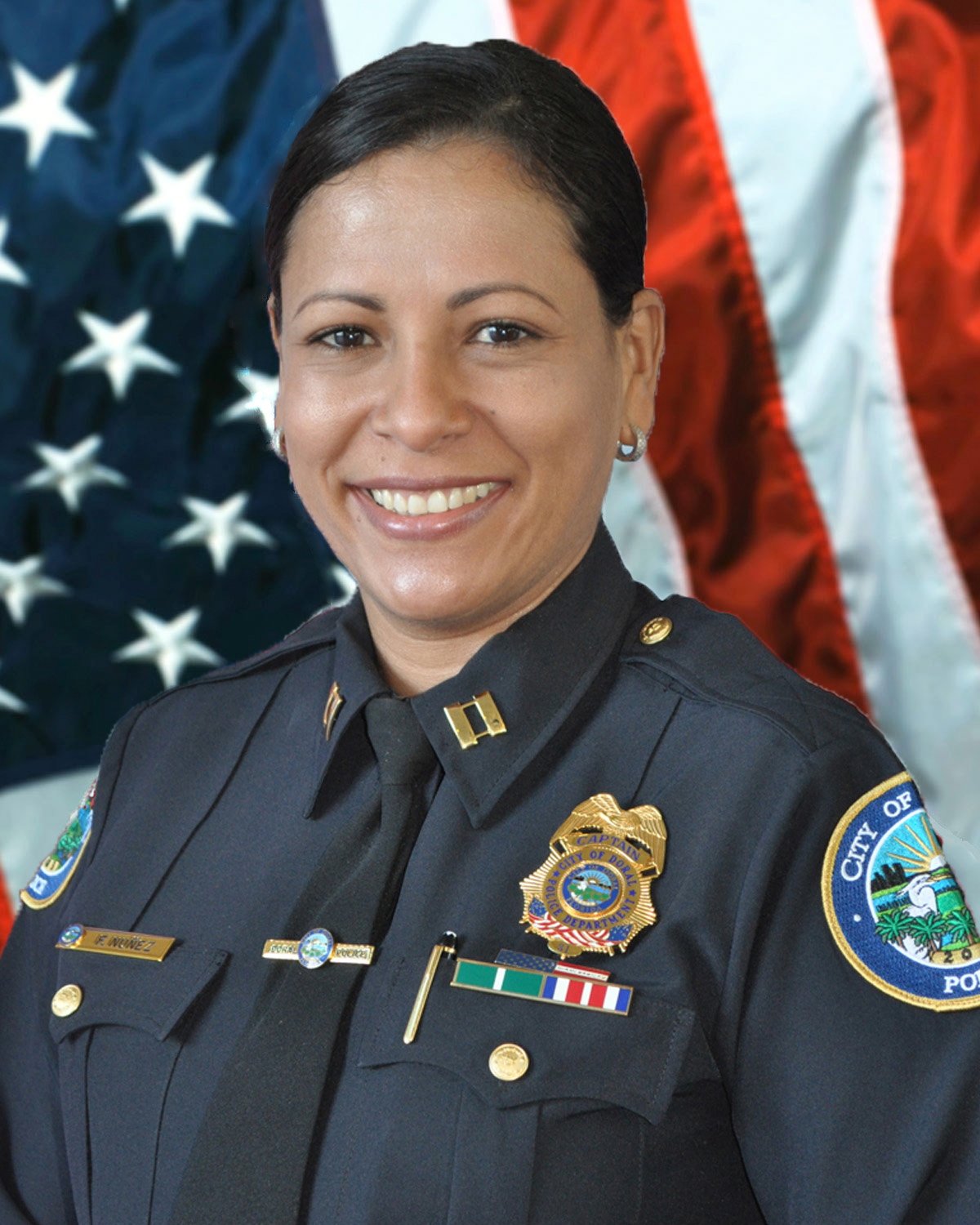 Captain Fatima Nuñez began her law enforcement career with the Miami-Dade Police Department in 2001. She excelled in her service and in 2004, she was selected to join the team of law enforcement professionals in charge of forming a new police department, the City of Doral Police Department. Her work performance, interpersonal skills and leadership potential were recognized early; whereupon, based on competitive examinations, she rose in rank to Police Sergeant in 2007. As the City of Doral Police Department formed, Sgt. Nuñez supervised the Report Review Unit, Crime Analysis Unit, Fleet, Special Events, and Desk Operations. She helped implement the Cry Wolf and E-notify Systems, software used to track alarms and court related subpoenas, respectively.

Sgt. Nuñez remained active in the daily running of the Doral Police Department once the Department was inaugurated in2008. Although active in administration, Sgt. Nuñez decided to expand her knowledge of police operations by requesting a transfer to road patrol. In 2013, Sgt. Nuñez was promoted to the rank of Lieutenant and placed in charge of police operations. At this level of command, she supervised daily activities of squad sergeants and directed personnel to areas of concern in order to maximize patrol of residential and commercial areas.

Although highly successful in her assignment, Lt. Nuñez was called upon to once again focus on police administration. In 2014, Lt. Nuñez was promoted to the rank of Captain where she supervised Training, Special Events, Communications, Budget, Staffing, Fleet, and Equipment Purchasing. Captain F. Nuñez accomplishments have been many. Among her many successes, Capt. Nuñez has: Formed part of the inaugural team of officers, worked her way through the ranks from Officer to Captain through distinguished service, received awards for Distinguished Service and as Officer of the Month, She helped form the Department’s Training Section, Reformed the Field Training Officer’s Program and implemented the Homeless Program. After overseen the Special Operations and Patrol Operations Divisions for a few years, on April of 2022, Captain Nuñez is now leading the Department’s Training and Community Center. Apart from her administrative knowledge, she is also versed in training specialties including: Incident Command, Instructor Training, Advance Interview and Interrogation, Crime Scene Investigations, Budget, OSSI, Cry Wolf, Homeland Security/Terrorism, and FBI Active Shooter. 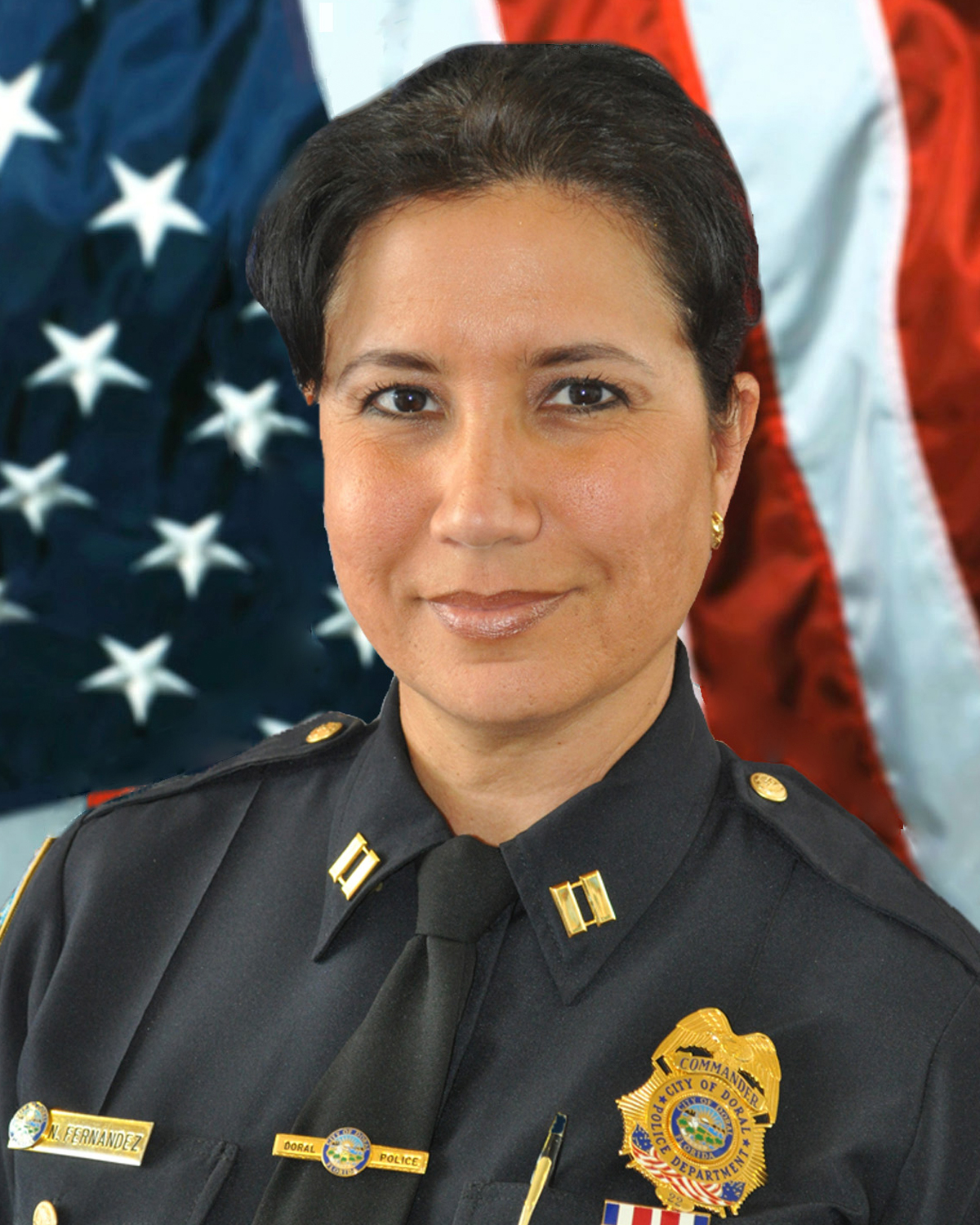 Captain Nancy Gomez-Fernandez began her law enforcement career with the Village of Pinecrest Police Department in 2001, where she was a member of the School Resource Unit, Field Training Officer and Honor Guard Member.

In 2007, she joined the Doral Police Department as a Sergeant and assisted with the recruitment and background process of officers joining the newly formed Doral Police Department. Once the department was inaugurated in June of 2008, she was assigned to the Uniform Patrol Division. In addition, to her regular supervisory duties, she also was the department’s Field Training Supervisor and was responsible for the management and training of all police officer trainees who were in the police academy and for their follow up training in the department’s Field Training Program.

In 2012, Sergeant Gomez-Fernandez was assigned as the department’s Administrative Sergeant. As the Administrative Sergeant she was responsible for overseeing the daily operations of the Police Department’s Administrative Unit, Court Liaison, Records, Police Fleet and False Alarm Units. She was also in charge of the Special Events Unit which is responsible for the planning, implementation, and analysis of police services required to maintain the public safety for residents and visitors who attend special events in the City of Doral.

In 2015, Sergeant Gomez-Fernandez was promoted to the rank of Lieutenant and assigned to the Professional Compliance and Standards Section.

In 2016, Lieutenant Gomez-Fernandez was promoted to the rank of Captain where she remained as the Professional Compliance and Standards Commander through April, 2016. Captain Gomez-Fernandez holds a Bachelor’s Degree from Union Institute and University and completed the International Association of Chiefs of Police Leadership Training. Currently, Captain Gomez-Fernandez proudly oversees the Patrol Bureau’s North District where she is responsible for the overall operations of the City’s North District patrol personnel and K-9 Squad to include the implementation of high risk operational plans. Captain Gomez-Fernandez is currently completing the University of Louisville’s 81st Command Officers Development Course which honors a tradition in police education and training. She is also certified as a Terrorism Liaison Officer with the Southeast Florida Fusion Center, Dignitary Protection, Incident Command, Community Emergency Response Team member, and Special Events Management certified.

Captain Gomez-Fernandez is also an active member of the following organizations: 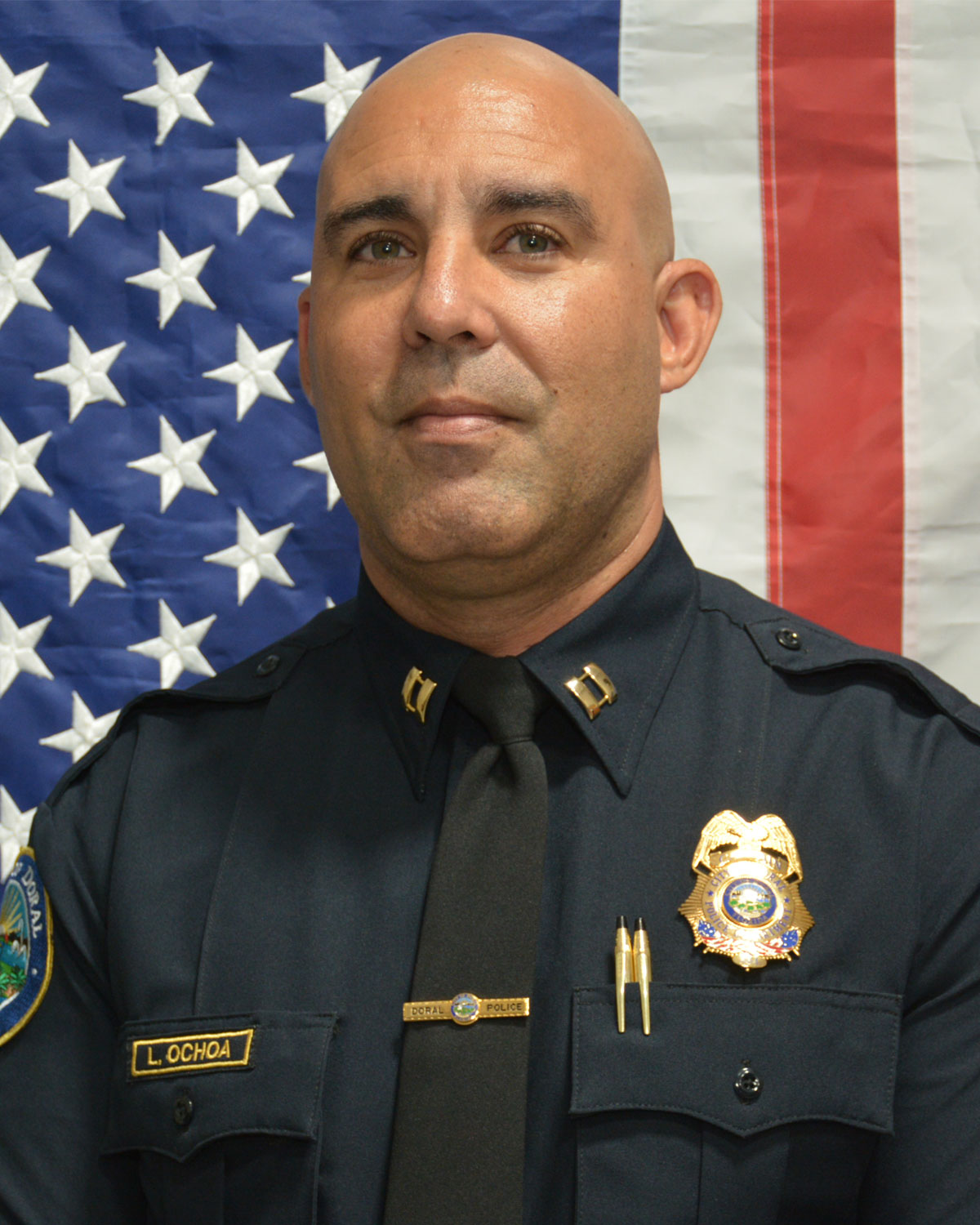 Captain Leonel J. Ochoa began his law enforcement career with Lee County Sherriff’s Office in 2006, where he served as a patrol officer and later served as a member of the Anti-Crime Unit.

In 2008, he joined the City of Doral Police Department as a police officer. Once the department was inaugurated, he was assigned to the Uniform Patrol Division. Additionally, Captain Ochoa was selected as one of the first Field Training Officers for the newly formed police department. As a Field Training Officer, he was responsible for the on-the-job training of newly hired police trainees.

In 2018, Sergeant Ochoa was promoted to the rank of Lieutenant and was assigned to the Uniform Patrol Division. As the Midnight Platoon Lieutenant, he was responsible for the day-to-day operations of the midnight platoon police services.

In 2022, Lieutenant Ochoa was promoted to the rank of Captain. Captain Ochoa is assigned to the Police Operations Division, responsible for the overall police operations within the City of Doral. Captain Ochoa holds a bachelor’s degree in Criminal Justice Management from Union Institute and University. Captain Ochoa served in the U.S. Army for 7 years in an active-duty status and 3 years in the Florida National Guard.