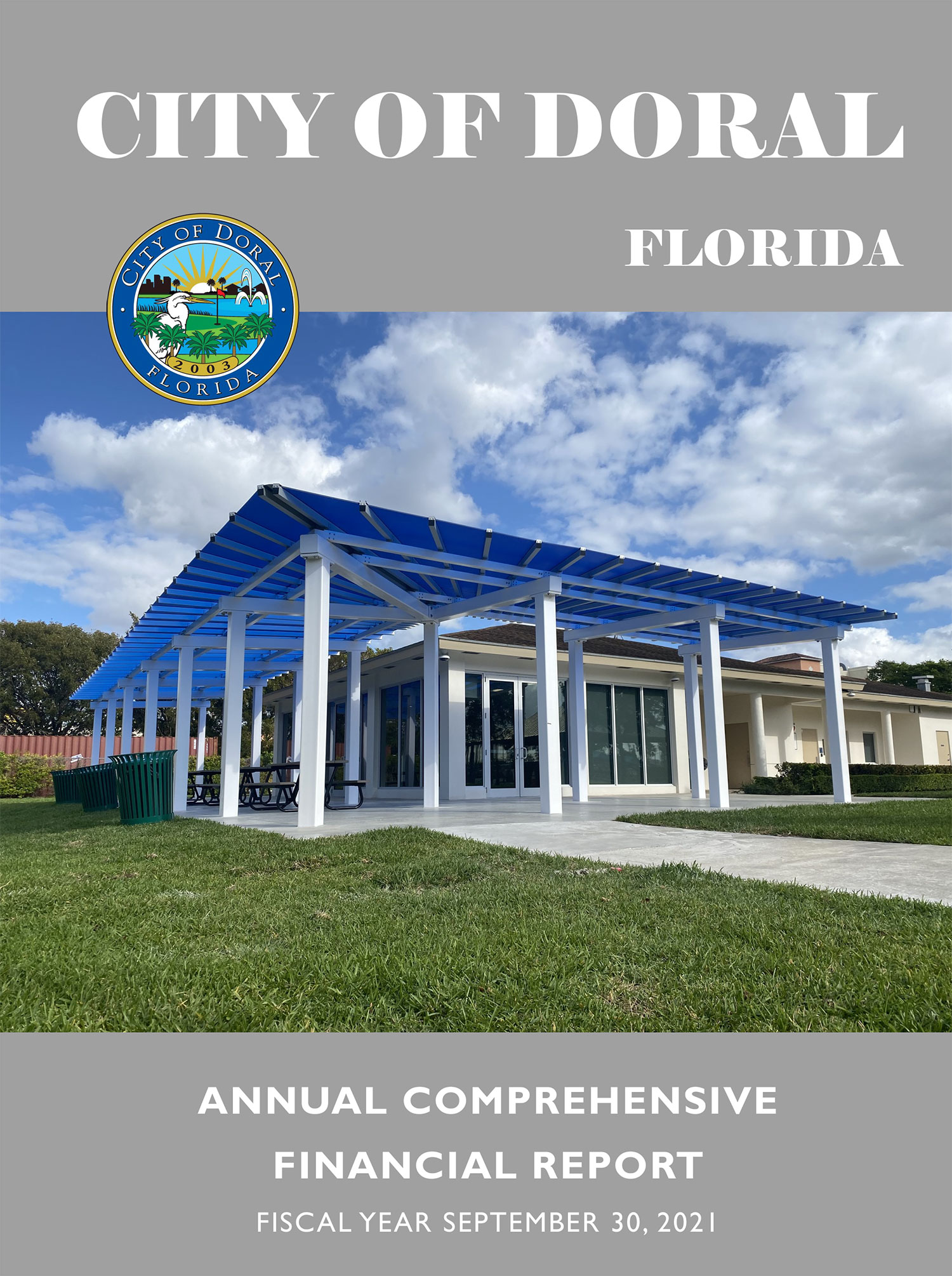 All financial reports are under the
Finance Department Annual Financial Report  click here.

The Government Finance Officers Association (GFOA) recommends that all units of local government publish, within six months of the close of each fiscal year, a complete set of financial statements presented in conformity with Generally Accepted Accounting Principles (GAAP) in the United States and audited in accordance with auditing standards generally accepted in the United States and in accordance with Government Auditing Standards by a firm of licensed certified public accountants. Pursuant to that recommendation, we hereby issue the Annual Comprehensive Financial Report (Annual Report) of the City of Doral (the City) for the fiscal year ended September 30, 2021.

This report consists of management's representation concerning the finances of the City. Consequently, management assumes full responsibility for the completeness and reliability of all the information presented in this report. To provide a reasonable basis for making these representations, management of the City has established a comprehensive internal control framework that is designed both to protect the City's assets from loss, theft, or misuse and to compile sufficient reliable information for the preparation of the City's financial statements in conformity with GAAP. Because the cost of internal controls should not outweigh their benefits, the City's comprehensive framework of internal controls has been designed to provide reasonable, rather than absolute, assurance that the financial statements will be free from material misstatement. As management, we assert that, to the best of our knowledge and belief, this financial report is complete and reliable in all material respects.

GAAP requires that management provide a narrative introduction, overview, and analysis to accompany the basic financial statements in the form of Management's Discussion and Analysis (MD&A). This letter of transmittal is designed to complement the MD&A and should be read in conjunction with it. The City's MD&A can be found immediately following the report of the independent certified public accountants. The remainder of the letter provides an overview of the City government as well as local economic conditions and prospects for the future.

Profile of the Government

The City of Doral, incorporated in 2003, is located in northwestern Miami-Dade County, Florida approximately 10 miles west of Miami, Florida. The City occupies a land area of 15 square miles bordered on the west by the Ronald Reagan Turnpike, to the north by the Town of Medley, to the east by the Palmetto Expressway and to the south by the City of Sweetwater. The City serves a population of approximately 75,874. The City receives tax levies on real and personal property located inside its boundaries.

The City has operated under the Mayor-Council-Manager form of government since incorporation. Policy making and legislative authority are vested in a governing council consisting of the Mayor and four Council members. The Council is responsible, among other things, for adopting ordinances and resolutions, adopting the annual budget, appointing the City Manager, City Attorney, and City Clerk. The City Manager is responsible for carrying out the policies and directives of the Council, for overseeing the daily operations of the government, and for appointing the heads of various departments.

The annual budget serves as a foundation for the City's financial planning and control. All departments of the City are required to submit requests for appropriations to the City Manager in a line-item based format. These requests are the foundation for developing a proposed budget. The City Manager will review and present this proposed budget to the Council for review. The Council is required to hold public hearings on the proposed budget and to adopt a final budget no later than September 30th, the close of the City's fiscal year. The appropriated budget is prepared, both by fund and department for the purpose of meeting Florida Statutes. No department may legally expend in excess of the amount appropriated for that department within an individual fund. The City Manager in conjunction with the Chief Financial Officer and Department Directors, shall have the authority to make intradepartmental budget amendments that reallocate appropriations amongst a department’s line-item appropriations, not to exceed $15,000, provided that the total appropriations to the department may not be changed. Consequently, the legal level of budgetary control lies at the department level. Transfers between departments and funds require the approval of City Council. The City Council may approve supplemental appropriations through an Ordinance.

In fiscal year 2021 the City of Doral continued to experience increases in construction and new investments, which have helped maintain the City tax base. The City’s revenues over the last six months have been on target with projections, except for building permit revenues which reflect a slowdown of new construction projects.

The City's tax base remained fairly stable with the final valuation estimated at $14.044 billion for this fiscal year. The preliminary taxable values for the following fiscal year ending September 30, 2022 are estimated at $14.505 million. The City’s regional economic base remains diversified, comprised of wholesale and retail trade, construction, light manufacturing, and tourism. Located in the center of a hemispheric market and easily accessible to South and Central America, and the Caribbean, Doral's strategic location and international commerce infrastructure make it the ideal location for international trade.

Airport
The City’s proximity to the Miami International Airport (MIA) provides a great venue for increased activity in the industries dealing in international trade. In 2020, MIA served 18.7 million passengers, with 40% of those being international. MIA also shipped 2.3 million tons of domestic and international cargo during the year. MIA ranks number 1 in domestic airports for international freight and number 2 in international passenger volume among all U.S. airports.

Public/Private Development Ventures
The City has a continuing collaboration with its local schools. Our Parks and Recreation Department have joint use agreements with various local schools to allow them the use of our park’s facilities for athletic competitions and practices. In turn, the schools allow the City the use of their facilities for events. The City’s fiscal year 2022 budget makes available grants of $6,000 per school in support of the Parent Teacher Association and/or Parent Teacher Student Associations of our local schools, in addition to providing each school with up to $1,500 in supplies. Also, in support of local businesses and non-profit agencies the City’s fiscal year 2022 budget makes available $50,000 of funds for a façade improvements program and $25,000 for non-profit community-based organizations to plan, develop, and implement sustainable projects that serve the needs of the Doral Community.

In order to meet the service demands of residents and visitors, the City continues to address the longterm planning necessary to fund the capital projects essential to the creation, improvement, enhancement, and preservation of public facilities and infrastructure. Through a clear and consistent policy of smart growth, we continue to enhance the community by providing residents with the amenities they need, while avoiding the indiscriminate building of undesirable developments.

The Public Works Department continues to pursue its infrastructure growth plan by completing several projects that include stormwater improvements, construction of roadways, and sidewalks and roadway repairs. The Parks and Recreation Department has several capital projects underway funded by a general obligation bond issuance.

Maintaining Adequate Fund Balances
The City follows GASB Statement No. 54, Fund Balance Reporting and Governmental Fund Type Definitions which requires that governmental fund financial statements present fund balances based on classifications that comprise a hierarchy that is based primarily on the extent to which the City is bound to honor constraints on the specific purposes for which amounts in the respective governmental funds can be spent. The City’s most significant fund balance classifications include:

Restricted: This classification includes amounts that can be used only for the specific purposes as determined by legislation, external regulations or laws of other government. Effective September 30, 2021 the City has $10 million restricted to Transportation, Parks and Police Impact Fee Funds, Law Enforcement Trust Fund, Capital Improvement Fund, Infrastructure Replacement Fund, and General Obligation Bond projects.

Committed: This classification includes amounts that can only be used for a specific purpose as determined by City Council. Ordinances and resolutions approved by Council are the highest level of decision-making authority for the City. Once adopted the limitation imposed by an ordinance or resolution remains in effect until another ordinance or resolution removes or revises the limitation. As of September 30, 2021, the City has $141.9 million of committed funds for park, police, and public works capital improvements, along with transportation roadway improvements, and other projects. This amount also includes $2.3 million committed to the Building Department Fund.

Unassigned: This classification includes the residual fund balance for the General Fund and represents fund balance that has not been assigned to other funds and that has not been restricted, committed or assigned to specific purposes within the General Fund. At September 30, 2021 the City has $75.3 million in unassigned funds. As approved by a City Ordinance the unassigned fund balance of the City shall not be less than 15% of the approved budget for the fiscal year.

The Government Finance Officers Association awarded a Certificate of Achievement for Excellence in Financial Reporting to the City of Doral for its Annual Comprehensive Financial Report for the fiscal year ended September 30, 2020. This was the seventeenth year that the City submitted and received this prestigious award. In order to be awarded a Certificate of Achievement, the City published an easily readable and efficiently organized annual report. This report satisfied both GAAP and applicable legal requirements.

The City received the GFOA’s Award for Outstanding Achievement in Popular Annual Financial Reporting (PAFR) for the fiscal year ended September 30, 2020. The City has received this award for seven consecutive years. The PAFR is designed to provide a user-friendly presentation of the City’s financial position and derives its information from the City’s Annual Comprehensive Financial Report.

We would like to acknowledge the excellent participation and professional contributions of the staff members of the Finance Department in the preparation of this report. We also extend our appreciation to the independent accounting firm of Caballero Fierman Llerena & Garcia, LLP for their professional service. We also express our appreciation to all departments who provided assistance and support.

We wish to thank the Mayor and the City Council for their unfailing support in maintaining the highest standards of professionalism in the management of the City of Doral's finances.